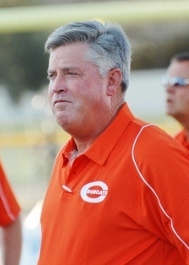 Celina’s longtime assistant and current head coach Butch Ford has confirmed to The Old Coach that he is retirng. Celina will promote offensive coordinator Bill Elliott to take over the Bobcat program.


The longtime assistant from North Texas took over the Bobcat program as the head coach in 2002 after G.A. Moore left for Pilot Point, his alma mater, about 10 miles down the road from Celina. Ford had worked under Moore for 25 years as an assistant. In fact, Ford was a standout player at Pilot Point for Moore.Ford was the Bobcat’s defensive coordinator during Celina’s four consecutive state-title seasons where the Bobcats had won 57 straight games heading into the 2002 season.
Celina compiled 2A state titles in 1995, 1998, 1999, 2000, 2001 under then head coach G.A. Moore with Ford as an assistant. The UIL realignment bumped Celina up to Class 3A for the 2002 season. Ford kept the Bobcats rolling even as they were the smallest school in Class 3A in 2002.Under Ford the Class 3A powerhouse Bobcats captured state titles in 2005 and 2007.Coach Ford tells The Old Coach that Celina will promote from within. The new head coach will be Bill Elliott, offensive coordinator.


Elliott, who is a TCU graduate and former player, just completed his 20th season coaching.
Read more on the Old Coach every week at http://theoldcoach.rivals.com/content.asp?CID=1365799
***
Sign up for our free email updates. http://feeds.feedburner.com/CollinCountyHeadlines Thanks for SHARING STORIES and helping us top 100,000 page views. … Follow @CollinHeadlines and @CollinCounty365 on Twitter, check in with us on Foursquare and like us on Facebook. Subscribe to us on YouTube’s CollinCounty365 channel. … Display Advertising starts at only $250 per month. … E-mail collincountyheadlines@gmail.com. Click for today’s TRAVEL DEALS – Ends Daily at 9 p.m.